Not much vintage lightweight stuff this time, hopefully in the future there will be for. There was a nice Gloria cambio corsa frameset for sale, a selection of 1970s road frames from Allegro to Zeus(really a-Z), and some parts. Mostly rusty junky ol’ American bikes. We did find a nice 1950s British bike- Chater lea bits and bobs, that I will photograph soon. Appears it might be a Claud Butler or someone else using Bilaminate lugs. 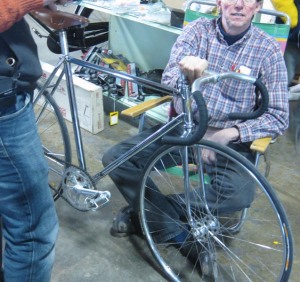