With a rebirth, or one artisan calls a revival, in the process of lightening bicycle components, I recently unearthed this catalog from the 1970s showing some of the results in the Renzetti modifications on Campagnolo parts.  Some of the weight differences(before and after the process) seem to be negligible, it appears to be more aesthetics. I guess in the end, all the combined weight savings does add up, and make for a pretty effect. The costs(in 1970s dollars) of saving 4ozs(1/4 of a pound) would have been $96, that’s $470 in today’s dollars! That is the weight of a cheeseburger, one expensive cheeseburger. See our Hill Cycle bicycle with lots of drillium and milling. Also check out Drillium Revival, they do awesome work.

UPDATE-(thanks Jamie Swan!)
Robin Renzetti was the machinist doing the modification back in the 1970s. 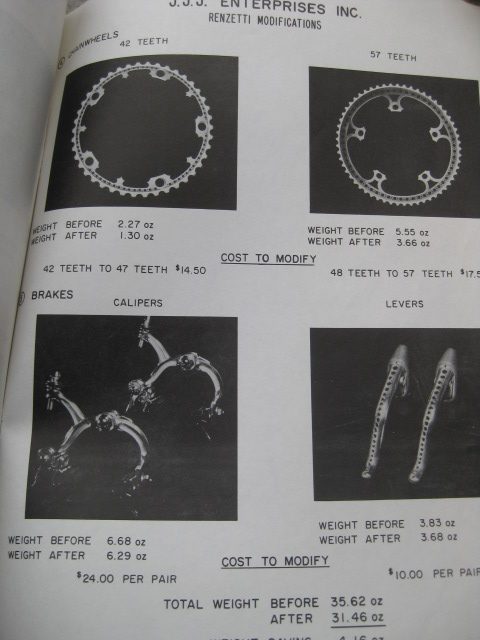