Lovely Bicycle! – a great blog bicycles and cycling, just had an interesting post about the restoring of older bicycles. They broke it down to 4 main categories-

The Full Restoration Approach-Make as original as it was when first built, replace worn parts with exact replacements of what it originally came it.

The All-Original Approach– Keep it all original, as the title suggest. Replace nothing, even if it means the bike then become obsolete.

The Period-Appropriate Approach-A restoration that is looser, does not have to be exact, but outfitted with parts that would be of the same time period as the frame.

The Updated Remix Approach– This is an anything goes approach. Bike is personalized and set up to suit the rider, no restrictions on what the bike was originally.

I love an all original bicycle, unrestored, of course. Most of my bikes fall into that category, but I do have to update perishables such as tires and brakepads, to make them ride able. I do have one bike, my chrome Rochet, that is anything but original. It was originally an early 1960s 10 speed bicycle and I have since turned it into a commuter, with upright handlebars, alloy fenders, fixed gear wheels, and porteur chaincase. It is a far cry from what it was originally. 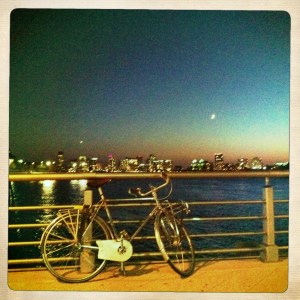