Another awesome customer of ours brought this by the shop because he was looking for some parts for the restoration. It is an early 1970s Raleigh International that was repainted by Circle A Cycles in Rhode Island. The Bronze Green is a hard color to reproduce, like the Cinelli silver. The fork is from an early 1980s Raleigh Team Professional, that actually was used in the 1st US victory of the prestigious Milk Race. Pretty cool.

The bike, as photographed, was not all built up yet. The Mavic hubs laced wheels will be replaced with Campagnolo large flange Nuovo Record hubs. He purchased red Tressostar cloth handlebar tape, Nuovo Record downtube shifters, and Campagnolo long dropout adjusters from us. The bike is set up with Weinmann centerpull brakes, which was correct for the International.

The bike is a project that the owner and his son are working on, they have really bonded on restoring vintage lightweights. 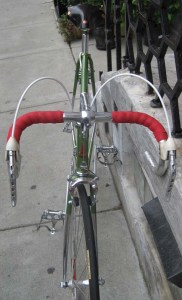 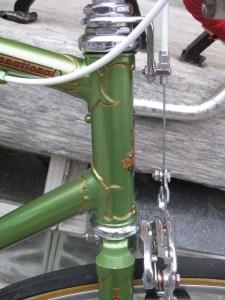